Currently, Izamal is known as the City of Three Cultures. This place represents the essence of the cultural legacy of the people in Yucatán. In this site, there are Mayan temples and colonial houses that take you back to the 16th, 17th, and 18th centuries. Its people are proud to show the cultural syncretism of the Mayans.

Nowadays, most of its historic buildings and houses are painted in yellow and white by the will of both the authorities and neighbors. This has helped to preserve its elegance and mysticism of bygone years which makes it stand out from other places in the region.

In its neatly cobbled streets, horse-drawn carriages take the visitors on a charming ride through its squares, parks, and historical suburbs. At night, the city offers a singular experience, giving away the magnificent view of a starry celestial vault outlined by the profile of its pyramids, temples, and colonial houses; a display of shades that seem to wake up from a centuries-old dream.

It is now recognized as the most important Marian center in Yucatán for the Catholics, with its yellow and white painted buildings that reminisce the colors of the flag of the Holy See, and its monastery devoted to San Antonio de Padua, one of the pillars of de Franciscan Order.

Thanks to its rich history and cultural significance, Izamal was declared a Magic Town of México in 2001.

This is one of the most important and majestic buildings in Mesoamerica. It is located on the plateau of the largest hill in the city. It is accessed utilizing three ramps built on its free sides. Inside the temple, there is a beautiful baroque style altarpiece, covered with gold. It shows scenes representing “The Death of Jesus,” “The Birth”, “The visit of the Virgin to Saint Elizabeth” and, “The visitation of the angel to Mary”. At the bottom, some niches let you observe the images of Saint Lucy, Saint Anthony, Saint Francis, and Saint Joseph.

In the lower part, some niches let you see the images of Saint Lucy, Saint Anthony, Saint Francis, and Saint Joseph. In the upper part, there is a representation of the “Crowning of the Virgin as the Queen of Heaven” and below, there is an image of the Virgin of the Pure Conception, a sculpture that was brought by Fray Diego de Landa from Guatemala. Furthermore, this part of the convent has a simple rail system that communicates with the Camarín, space where the believers show their faith and devotion. 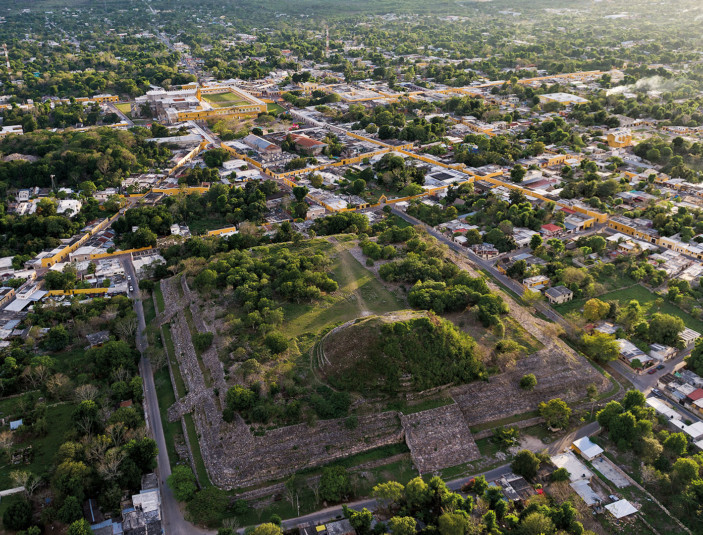 Kinich Kakmó means “Fire Macaw with a Solar Face.” It is interpreted that the Mayans believed that the god Kinich, came down as a macaw in the heat of the midday sun, to burn and therefore to purify the sacrifices or offerings brought to the Mayan pantheon. It is the largest pyramid in the Yucatán Peninsula; the third one in Mexico after the Pyramid of the Sun in Teotihuacán and the one in Cholula in Puebla.